Recently, It is observed that Google is drifting away from its Tag Line of “Don’t be evil”. First, Google was observed linking to sites that were spreading Malware and now it appears to have extended its support to terrorism. Google strictly warns Adsense Publishers from putting ads on Violent content or Hate related content. But during the recent Terrorist attacks on Five-Star Hotels in Mumbai, Google showed up something that you would never believe if I wouldn’t attach this Proof 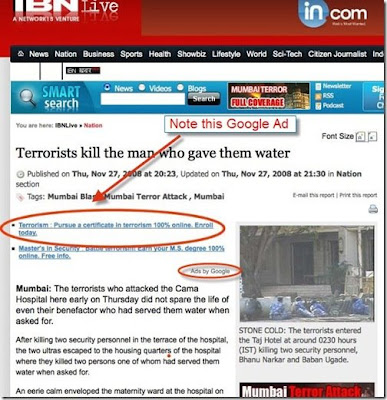 This ad was found on a story which was a news coverage of the recent attacks in Mumbai(India). When everyone is cursing the terrorists who have caused such huge loss to Mumbai, When all the countries in the world are trying to fight terrorism, Google on-the-other-hand is encouraging people to pursue and get excellence in the field of terrorism. Is this what is expected from the biggest Internet company?

Even though, the Ad might have resulted due to some error, but still it might have great effect on the people viewing it.

*Tribute to all Indians Soldiers who fought bravely to bring normalcy in the City. Condolences to family members of all those whose lost their lives in the terror attack.
Image credit: Jithesh Nair(from Orkut). Thanks Rahul